By Bob Grant Right your Writing How to sharpen your writing and make your manuscripts more engaging. © Printstock / CSA Images / Corbis When Judith Swan was a PhD student in molecular and cell biology at the Massachusetts Institute of Technology (MIT), her research on specialized microtubules in chicken cells went pretty smoothly. But despite expert guidance and advice from her advisor, &”when it came time to write, nobody had

How to sharpen your writing and make your manuscripts more engaging.

When Judith Swan was a PhD student in molecular and cell biology at the Massachusetts Institute of Technology (MIT), her research on specialized microtubules in chicken cells went pretty smoothly. But despite expert guidance and advice from her advisor, &”when it came time to write, nobody had very much to say,&” Swan recalls. Swan was essentially told to write up her research, then was edited, critiqued, and told to try again. &”We teach writing by stochastic processes&-the random walk,&” she says.

After finishing her PhD at MIT, Swan made her way to Duke University, where she attended a workshop on improving scientific writing presented by the linguist George Gopen. &”Oh my goodness,&” Swan recalls thinking, impressed by how Gopen and his colleagues talked about effective writing in science. &”This is an amazing language.&” She was soon engrossed in an &”informal postdoc&” with Gopen to pick up on his perspective.

She realized that the entrenched paucity of guidance in scientific writing has led to a body of scientific literature that is often poorly written and opaque. 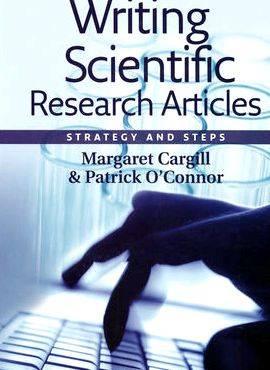 Now an assistant director for scientific and technical writing in Princeton University’s writing program (open to scientists and nonscientists), Swan aims to change that. Success in science, she says, &”takes as much skill with language as it does working in a laboratory.&”

Tell Me A Story of Science

The cardinal rule of writing, says Swan, is to focus on the reader, which doesn’t mean dumbing down manuscripts. &”The real readers that matter are the peer reviewers,&” she notes. &”Peer reviewers are specialists and for them to get excited, you’re going to be speaking a language that is not necessarily accessible to the average reader.&” The trick is to write manuscripts that answer very specific technical questions while presenting the information in a palatable and fluid way. This involves creating a delicate balance between providing too much and not enough contextual information, Swan says. &”It’s hard to find the right balance,&” she says, &”people are working in a very complex environment with very few guidelines.&”

Here are ways to improve your writing practices and tips on how to align your writing to your readers’ expectations.

Start at the end
Most readers of scientific manuscripts don’t read papers from beginning to end. &”The fact that we’ve got an article structure is so people can know where to jump to,&” says Australian linguist and self-employed research communications consultant Margaret Cargill.

Because the people reading your papers will likely start with the results of your research, so should you, she says. &”The whole structure of a paper is built around the results,&” she says. &”That’s where you’ve got to start the telling of the paper.&” Cargill recommends getting the tables and figures perfect before writing the results section. Then move onto the discussion section and then the introduction. &”You can do the methods anytime, really.&”

Write daily for 15 to 30 minutes
During your daily writing sessions, don’t think about your final manuscript. Just write journal entries, says Tara Gray, director of the teaching academy that provides training and support to New Mexico State University professors. &”People think there’s two phases of a research project&-doing the research and writing it up,&” she says. Rather than setting aside large chunks of time for each activity, combine them to improve your writing and your research. The first time Gray encouraged a group of faculty members at New Mexico State to adhere to this schedule for three months, they wrote about twice as much as their normal output.

Log your time
Gray says that the simple exercise of keeping a writing log of how much time you spent writing and sharing it with someone&-a colleague, spouse or child&-makes it more likely that you’ll keep it up. &”It’s just an accountability measure,&” she says.

Post your thesis on the wall
Keep your thesis statement right in front of you, rather than in a notebook or computer file. It keeps the essential kernel of your research in your face so that you can change and edit the thesis as your research and writing dictate. &”It’s better to have some rough hypothesis, however rough, than to say, ‘;I’m not quite ready to make my hypothesis yet’,&” Gray says. Plus, &”you sharpen what you’re studying as you study it.&”

Write an after-the-fact outline
Gray says that copying the topic sentences at the beginning of each section&-or even each paragraph&-of your paper, and pasting them into a new document can help you focus each section. &”Line those [key sentences] up, see where they go, where there’s repetition, and where you can sharpen your points.&” Although Gray says that she is not the type to draft an outline before she writes, she often uses this after-the-fact outlining to hone her writing and whittle down her language to the essential ideas.

Send early drafts to nonexperts
Enlist the aide of a researcher outside of your main area of focus for review of the first drafts. A mammalian geneticist, for example, might request the help of a plant geneticist for reading early drafts. While it may seem unlikely that fellow academics will have the time to read over your manuscript drafts, Gray says that more than half of the people she sends drafts to read and comment on her work.

Read out loud
This time-honored trick can and should be used by academics writing scientific research papers, Gray says. &”All our prose should move in the direction of being more conversational.&” A tone that is too chatty should be avoided, but reading your papers out loud can help you achieve a more inviting tone and help reveal bumps in the logical flow of an argument.

Introduce concepts gently
Instead of jumping right into a new and complex topic, give your reader some gentle lead-in with information that is established or familiar. &”Most scientists want to get the new stuff out at the beginning of the sentence. That’s absolutely backwards. It doesn’t work for readers,&” says Cargill.

Instead of: &”The enthalpy of hydrogen bond formation between the nucleoside bases 2\’ deoxyguanosine (dG) and 2\’ deoxycytidine (dC) has been determined by direct measurement. dG and dC were derivatized at the 5\’ and 3\’ hydroxyls with triisopropylsilyl groups to obtain solubility of the nucleosides in non-aqueous solvents and to prevent the ribose hydroxyls from forming hydrogen bonds.&”

Try: &”We have directly measured the enthalpy of hydrogen bond formation between the nucleoside bases 2\’ deoxyguanosine (dG) and 2\’ deoxycytidine (dC). dG and dC were derivatized at the 5\’ and 3\’ hydroxyls with triisopropylsilyl groups; these groups serve both to solubilize the nucleosides in non-aqueous solvents and to prevent the ribose hydroxyls from forming hydrogen bonds.&”

(The semicolon creates a distinction between two bits of information and sets up for the next logical thought.)

Ensure that each sentence is a consequence of the preceding one

&”When a new sentence begins, you need to have a detail at the beginning of that sentence that connects with a previous sentence,&” to help create a narrative tone, says Michael Alley, associate professor of engineering communication at Pennsylvania State University.

Instead of: &”Mount St. Helens erupted on May 18, 1980. A cloud of hot rock and gas surged northward from its collapsing slope. The cloud devastated more than 500 square kilometers of forests and lakes. The effects of Mount St. Helens were well documented with geophysical instruments. The origin of the eruption is not well understood.&”

Try: &”Mount St. Helens erupted on May 18, 1980. Its slope collapsing, the mountain emitted a cloud of hot rock and gas. In minutes, the cloud devastated more than 500 square kilometers of forests and lakes. Although the effects of the eruption were well documented, the origin is not well understood.&”

Avoid long strings of modifiers between the subject and verb

This helps your reader follow the story without getting sidetracked by superfluous detail.

The trick is to write manuscripts that answer very specific technical questions while presenting the information in a palatable and fluid way.

Instead of: &”Recently, however, immunoprecipitation experiments with antibodies to purified, rotenone-sensitive NADH-ubiquinone oxido-reductase [hereafter referred to as respiratory chain NADH dehydrogenase or complex I] from bovine heart, as well as enzyme fractionation studies, have indicated that six human URFs (that is, URF1, URF2, URF3, URF4, URF4L, and URF5, hereafter referred to as ND1, ND2, ND3, ND4, ND4L and ND5) encode subunits of complex I.&”

Try: &”Recently, however, several human URFs have been shown to encode subunits of rotenone-sensitive NADH-ubiquinone oxido-reductase. This is a large complex that also contains many subunits synthesized in the cytoplasm; it will be referred to hereafter as respiratory chain NADH dehydrogenase, or complex I.&”

Enliven your writing and keep your reader engaged by using verbs that portray action, rather than &”is,&” &”has,&” and other similarly lethargic verbs.

Instead of: &”Transcription of the 5S RNA genes in the egg extract is TFIIIA-dependent. This is surprising, because the concentration of TFIIIA is the same as in the oocyte nuclear extract.&”

Try: &”In the egg extract, the availability of TFIIIA limits transcription of the 5S RNA genes. This is surprising because the same concentration of TFIIIA does not inhibit transcription in the oocyte nuclear extract.&”

To each idea, its own sentence.

To avoid confusing readers and losing momentum, populate sentences with a single point. This also applies to other units of discourse&-clauses, paragraphs, sections, articles, and so on.

Instead of: &”Enormous mining companies are both continuing operations at old gold mines, such as the case of the Homestake Mine in Lead, South Dakota, which has operated continuously since 1877 and is continuing to increase its operations, and opening new gold mines, often in very disturbing locations, such as the proposed, and for now, postponed, New World Mine, whose proposed location was about 2.5 miles from the border of Yellowstone National Park, near Cooke City, Montana.&”

Try: &”Enormous mining companies continue operations at old gold mines and expand operations to new sites. For example, the old Homestake Mine in Lead, South Dakota has operated continuously since 1877 and is continuing to increase its operations. New mines, such as the New World Mine, which was planned to be sited near Yellowstone National Park, often disturb sensitive ecological communities.&”

For more guidance in clearing up common mistakes in your writing see:
G. D. Gopen, J. A. Swan, &”The Science of Scientific Writing,&” American Scientist. 78: 55058, 1990 (from which several of the above writing examples were taken). 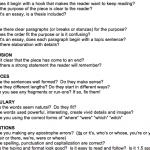 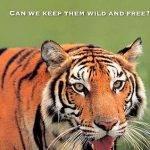 Article writing on save tigers posters 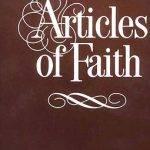 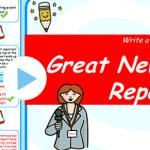 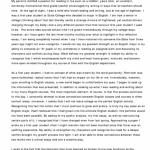